For those of you not quite up to speed on chimpanzee-human similarities; chimps are more closely related to humans than they are to gorillas, with a difference of just over one percent of DNA.

Those who have worked closely with chimpanzees confirm that they feel and express emotions such as sadness and happiness, fear and despair—and they know mental as well as physical pain.

So I guess if they could communicate you might think we’d all be really great buds wouldn’t we?

Well, this seems to be the opinion of 5 enthusiastic California-based primatologists anyway.

The controversial story has been hijacking US television screens since yesterday evening, when the 5 chimp-loving primatologists decided to publicly unleash how far they’ve come on their mission to break down the barriers of communication between us and our closest relatives.

Taking us back, yesterday they told NRL News that approximately two years ago they began training one particularly intelligent chimp in the captivity group, Marnie, the written English language as he demonstrated “exceptional learning abilities” during sign language training in comparison to his fello chimpanzees.

And this, was just the beginning.

After almost two years of one-to-one “vocab lessons”, Marnie the chimp could easily identify hundreds of objects at the prompt of a flashcard. Of course Marnie can’t identify these objects by speaking, but when the word is shown to him he identifies the object by “pointing at it, grunting enthusiastically and flailing his arms”.

Over the past couple of months, Dr. Marcus Fibrosa, head of the Californian primatologists department decided to take Marnie’s advanced learning abilities to a whole new level, and so as sure as Paddington Bear went to London, Marnie learned to text.

Bless. Just look at him go…

Although Marnie is still unable to type full coherent sentences, he can easily text vocabulary relating to food, surroundings, nature, people, physical characteristics and other animals; a few of his favourite words to type being “friend”, “fridge”, “hug” and of course, “banana”.

But now, just like the rest of us, the problem seems to be that he won’t put the phone down.

Protesters outside the labs

Hundreds of outraged protestors have gathered outside the captivity centre gathering petitions and creating a media storm by shouting explicit chants, questioning the primatologists’ sanity and condemning them to a “less-comfortable life”, to put it politely.

Marcus Whitmore of NRF News held a private interview with the primatologists inside the grounds to avoid the uproar outside, where Dr. Fibrosa justified –

“It’s not cruel, these chimps were in captivity because they cannot survive out in the wild on their own. Why shouldn’t they experience modern luxuries we have? There are circus’s going on right now where perfectly healthy chimps are caged and forced to unicycle or something else ridiculous, and here everyone is attacking us over giving Marnie a God damn i-phone! Are you serious?”

“Marnie loves Angry Birds, you should see how happy he gets when he plays… I doubt wild chimps get that excited over anything that goes on in the outdoors… I know it sounds strange, but we’re giving him a better quality of life, otherwise he’s just sitting in an enclosed area bored off his tree… literally”.

As if things couldn’t get worse, Dr. Aheny, Fibrosa’s colleague chimed in during the interview –

“He’s going to flip the lid when he sees the new Apple emoji release”.

Anyway, seeing Marnie’s success, the scientists have also been giving two other chimps in the captive group “English lessons” to see how they communicate among themselves using human behaviourisms. However we predict it will be another couple of months practice before they, too, pick up the i-phones.

Whether the government will put a stop to these unnatural experiments or not remains to be decided over the next couple of days.

We’re not sure what to make of this absurd chimp-human social behaviour experiment ourselves, but it sure does raise a couple of questions for the future –

Will Apple be using chimps to front a new campaign?

Will there be Primate emoji’s in the next iOS release?

Will chimpanzees have their own social network in the next couple of years?

I’m sure Marnie will keep us posted via twitter or something. 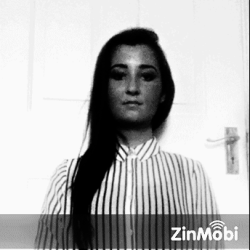